How To Play Euchre

Euchre is a popular partnership card game played with four people in two partnerships with a deck of 24 standard playing cards.

Euchre uses a deck of 24 standard playing cards of A, K, Q, J, 10, and 9 of each of the four suits (Diamonds, Hearts, Clubs, Spades).  Each player is dealt five cards.  This leaves 4 cards left over which is commonly called the kitty.  The top card of the kitty is turned face up and bidding begins. 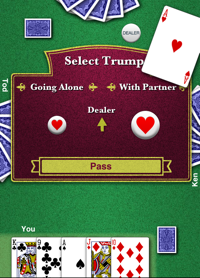 Once the cards are dealt and the top card in the kitty is turned over, the upturned card's suit is offered as trump to the players in clockwise order beginning with the player to the left of the dealer.

If a player wishes the proposed suit to be named trump, he orders up the dealer and the dealer must add that card to his hand. If all other players pass, the dealer can declare trump by picking up the card.  If the dealer is ordered up or picks up the card, he must discard a card face down in order to return his hand to 5 cards.

If everyone passes, the top card is turned face down and that suit may no longer be chosen as trump. Trump selection proceeds clockwise beginning with the player to the left of the dealer. The dealer does not get to pick up and discard a card during this round.  Euchre HD plays stick the dealer so the dealer is required to pick the trump suit if no one else does during this round.

When a suit is named trump, any card of that suit outranks any card of a non-trump suit. The highest ranking card in euchre is the Jack of the trump suit (called the right Bower or right) and then the other Jack of the same color (called the left Bower or left). In descending order thereafter it is A K Q 10 9. For example: If hearts are trump then the right bower would be Jack of Hearts and the left bower would be Jack of Diamonds.

When naming a suit as trump, a player asserts that their partnership intends to win the majority of tricks in the hand (at least 3 of the 5). A single point is scored if the team succeeds, and two points are scored if the team takes all five tricks.

A caller with exceptionally good cards can go alone, or take a loner hand, in which case he or she seeks to win all five tricks without a partner. The partner of a caller in a 'go alone' hand does not play, and if all five tricks are won by the caller the winning team scores four points. If only three or four of the tricks are taken while going alone, then only one point is scored. If euchred while playing alone, the opposing team still only receives two points.

The player to the dealer's left begins play by leading a card.  Play continues in clockwise order; each player must follow suit if they have a card of the suit led. The left bower is considered a member of the trump suit and not a member of its native suit.  In euchre, one is never required to trump, but one is required to follow suit if possible to do so: if diamonds are led, a player with diamonds is required to play a diamond.  If they have no diamonds they my play a trump card or an off suit.

After all five tricks have been played, the hand is scored. The player to the left of the previous dealer then deals the next hand, and the deal moves clockwise around the table until one partnership scores 10 points and wins the game.

The first team to 10 or more points wins the game.

Learning to Play on iPhone or iPad

Euchre HD is available for the iPhone and iPad.  It's a great way to learn how to play Euchre as it supports single player games where you play against the computer or multi-player where you can play other people.  We also have a Euchre HD FAQ that talks more about Euchre HD specifically.